FRIDAYS 5PM- 6:30PM ( preferably 6-10 YRS ) There is the option of coming to Saturday rehearsals if you can't make Fridays.

PLEASE NOTE LEAD ROLES AND SOME CAST MAY BE REQUIRED FOR EITHER DAY, DEPENDING ON THE CHOREOGRAPHY.

ALL AUDITIONS AND REHEARSALS ARE HELD AT: 7 REBECCA PDE WINSTON HILLS 2153.ONCE AGAIN THERE WILL BE A $19 REHEARSAL FEE PER 1.5HR REHEARSAL. CREATIVE KIDS VOUCHERS ARE WELCOME. (Please note, rehearsal fees are non-refundable for any reason) 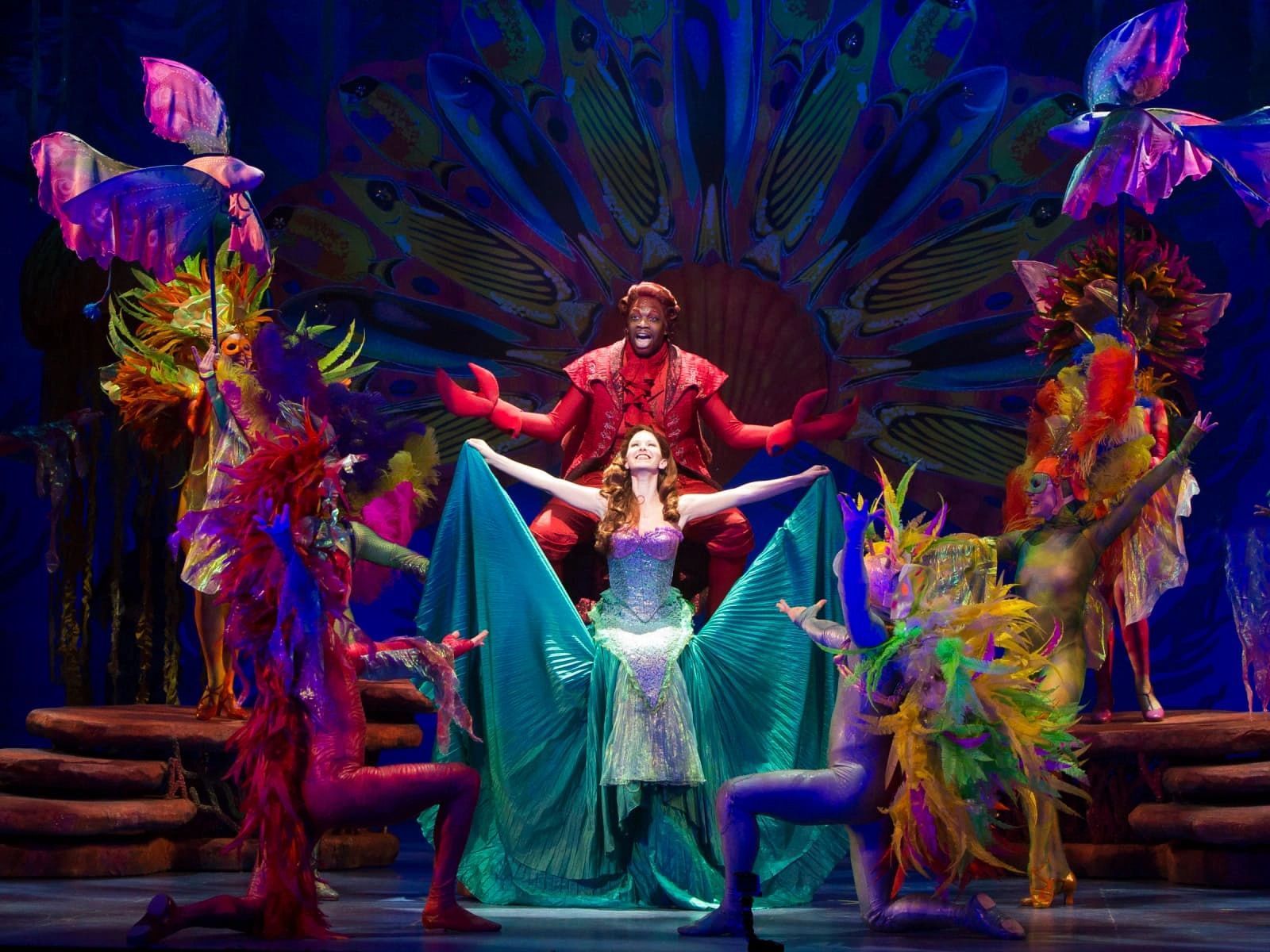 additional audition info on link below

ArielAriel, the heroine of our story, is a little mermaid who longs to be human. Cast a strong singer and dynamic performer in this role. Ariel has some beautiful solos but must be able to convey meaning through gesture once she loses her voice.Gender: FemaleVocal range top: Eb5Vocal range bottom: Bb3

Prince EricPrince Eric is the adventurous prince who captures Ariel's heart. Look for a charming performer with a sensitive nature. Prince Eric has a few small solos, but it is more important to cast a strong actor in this role.Gender: MaleVocal range top: D5Vocal range bottom: B3

SebastianSebastian is the meticulous and anxious crab who tries to keep Ariel safe while getting to lead some of the most memorable songs in the show! Look for a strong singer who can also handle Sebastian's emotional range. Sebastian can be played by a boy or girl.Gender: AnyVocal range top: D5Vocal range bottom: A3

FlounderFlounder is Ariel's sincere and sensitive best friend who is loyal to the end. This spunky fish also has a show-stopping solo in "She's in Love." Flounder can be cast with a girl or a boy with an unchanged voice. This may be a wonderful role for a younger performer who is ready to take the next step into the spotlight.Gender: AnyVocal range top: Db5Vocal range bottom: G3

King TritonKING TRITON rules the sea and is a force to be reckoned with. This non-singer needs to command the stage as a strong leader but also show the tenderness of a parent. Cast a mature performer who feels comfortable playing father to Ariel and the Mersisters.Gender: Male

UrsulaUrsula is the manipulative sea witch who tries to overthrow King Triton. She is cunning and devious and will stop at nothing to get what she wants. Cast a mature performer who can bring out this villain's humor while finding texture in Ursula's complexity. Ursula's songs can be challenging, so look for a singer who will feel comfortable with these solos.Gender: FemaleVocal range top: C#5Vocal range bottom: F3

TentaclesThe Tentacles are extensions of Ursula, perhaps the poor unfortunate souls who are now trapped in her lair. Look for six or eight performers who work well together and can move as a unit.Gender: AnyVocal range top: C#5Vocal range bottom: C4

Flotsam and Jetsam are Ursula's slippery spies. These electric eels are sinister and sneaky, so look for performers who can be underhanded and devious while still being heard on stage. Flotsam and Jetsam can be played by boys or girls.

Flotsam and Jetsam are Ursula's slippery spies. These electric eels are sinister and sneaky, so look for performers who can be underhanded and devious while still being heard on stage. Flotsam and Jetsam can be played by boys or girls.

ScuttleScuttle is the know-it-all seagull who serves as Ariel's expert on humans. He is funny and off-beat. While a good singer will rock "Human Stuff," this song can easily be spoken in rhythm. Look for a performer with good comedic timing who is willing to have fun with Scuttle's eccentricities.Gender: AnyVocal range top: E5Vocal range bottom: B3

GullsThe Gulls are Scuttle's flock of zany "back-up singers" who help explain human stuff to Ariel. While there are three principal gulls written in the score, feel free to add as many as you need to best serve your production. The Gulls' solos can be spoken if necessary.Gender: AnyVocal range top: G5Vocal range bottom: B3

GrimsbyGrimsby is Prince Eric's prim and proper valet. He is rigid in personality and constantly trying to guide Prince Eric towards the throne. While Grimsby does have some singing to do, strong acting trumps singing ability for this role.Gender: MaleVocal range top: C5Vocal range bottom: E4

Chef LouisChef Louis is the over-the-top head chef in the palace. He is always wild and frenetic. This is an excellent featured role for a comedic performer.Gender: MaleVocal range top: C5Vocal range bottom: A3

ChefsThe Chefs are Chef Louis's assistants. The music in "Les Poissons" can be challenging, so good choral singers are a plus for this group. Your Chefs can also double as members of the Sea Chorus.Gender: Any

CarlottaCarlotta is the headmistress in Prince Eric's palace and Ariel's greatest human ally. This non-singing role needs to be warm and maternal to make Ariel feel welcome.Gender: Female

PrincessesThe six Princesses try everything they can to win the heart of Prince Eric. Since none of them possesses the voice Prince Eric is searching for, cast actresses who can create an exaggerated and comedic personality through song. The six Princesses can double as the six Mersisters.Gender: FemaleVocal range top: G5Vocal range bottom: E4

PilotThe Pilot is the head sailor on Prince Eric's ship. This nautical expert who entertains the sailors with wild tales of the sea presents an opportunity to highlight a developing performer. The Pilot has a few speaking lines, but his singing voice is most important.Gender: MaleVocal range top: C5Vocal range bottom: Bb3

SailorsThe Sailors are the crew of Prince Eric's ship. They are eager for adventure and ready to tackle a storm. The Sailors can be played by boys or girls and can double as Sea Chorus.Gender: Any

SeahorseThe Seahorse is the court herald for King Triton. This non-singing part is a good role for a young performer with a clear speaking voice.Gender: Any

Sea ChorusThe Sea Chorus is responsible for creating each world within the show. Look for performers who can move gracefully and are capable of being part of a scene without drawing focus. This can also be an opportunity to showcase some of your more skilled dancers. The Sea Chorus can double as Merfolk, Sea Creatures and Lagoon Animals.Gender: Any

Sea CreaturesThe Sea Creatures are the ensemble under water animals in King Triton's court. They can include as few or as many performers as your production permits. There are several moments to showcase both dancers and singers in "Under the Sea."Gender: Any

MerfolkThe Merfolk of King Triton's Court and can double as Sea Creatures.Gender: Any

Please note there is a rehearsal fee of $19 per rehearsal. ( One rehearsal is 1.5hrs long)  The fee is still due if you miss any rehearsal.